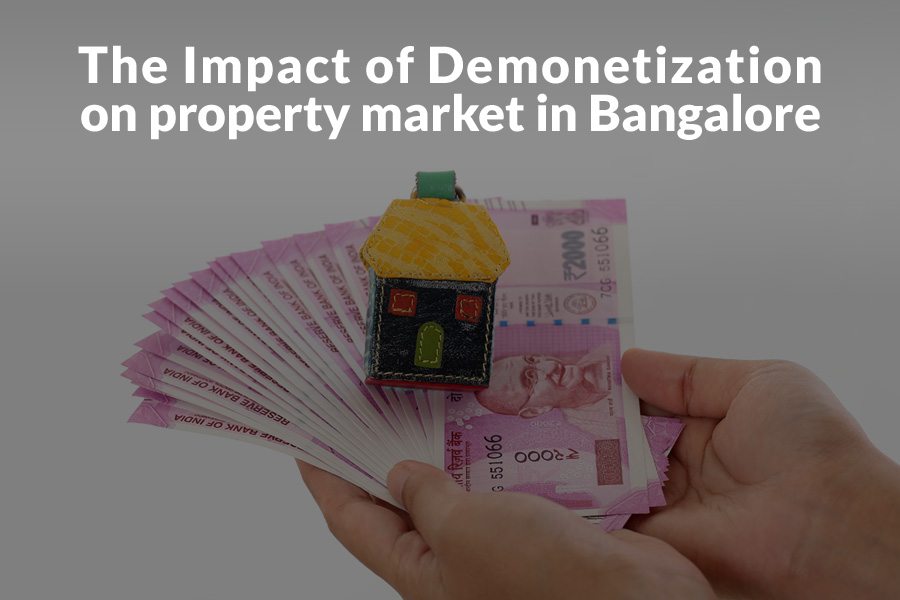 Bangalore is not just the capital city of Karnataka, but also an urban city that has been constantly growing in terms of its people and development. With the IT and commercial industries attracting a number of migrants from other cities to settle in Bangalore, the real estate market in the city has been growing steadily. There are several pockets and areas in the city of Bangalore that have seen growth and development in the recent past. This has not only increased investment avenues for the people, but has also helped a number of developers to develop projects that are futuristic. However with the current changes that have recently occurred on the economic front have left a huge impact on the real estate in India. One of the biggest developments that has affected several sectors of the Indian economy was the demonetization drive that was initiated by the Prime Minister Narendra Modi to eradicate black money and corruption from the country. Real estate in India has also seen various other developments in the form of the RERA act and the recent imposition of the GST reform all over India.

One thing for certain is that with all of these reforms, Indian economy including the real estate segment is slowly turning into a consumer’s market. A welcoming wave hits the country as the banks are likely to get liquidated with almost 20 Lac Crores rupees worth of fresh money flowing into the country. The demonetization move came with much speculation on it’s likely impact upon the Indian market scenario. However, eight months down the line we have certain metrics that have only ascertained how the entire move was a progressive one for a better India.

What was Demonetization All About?
On 8th November, 2016; the Government of India introduced the Demonetization drive which required all the Rs. 500 and Rs. 1000 notes to be immediately surrendered. The demonetization of the currency notes created a stir in the country with mixed reactions coming in from various industries. The initial implementation of the drive came with a lot of struggle for the common man in terms of the money exchange. However, things soon got stabilised and here we are now reaping a few benefits that came from the act. The Prime Minister’s act was more of a cleanliness drive that was meant forstabilizing the economy and eradicating the evils of black money and corruption. The Black market in India was predominant in various industries and sectors including the real estate.

Demonetization and Its Impact on Bangalore’s Real Estate Market

Real estate industry for a long time lived with a reputation of being a sector that was run with several malpractices including black money and unsystematic ways of functioning. However, with the demonetization move, the government directly hit hard on the money launderers and those who stocked up black money. The government’s recent move is likely to pressurize the black money hoarders as it got them to come out in the open and declare their incomes. This is going to have a cool down effect on various segments of the real estate in India, particularly the unorganized and individual builders. A number of developers so far insisted on a cash component to be a part of the payment deal, which deterred potential home buyers particularly the ones hailing from the middle class. The recent ban introduced on the high value currency notes is meant to deal with this malpractice at large. The demonetization move is also likely to impact the interest rates which is certainly a huge relief for the homebuyers paying hefty EMIs.

Like the rest of the country, developing real estate markets in cities like Bangalore are also expected to grow positively with the move. Organized players like Indya Estates who have continued their operations with much integrity and transparency are least likely to be affected by this move, and are only getting geared up to meet the growing demands from the Indian consumers. Builders operating in the organized segment are largely ready to move in apartments on sale which are normally bought by people through home loans. Due to the direct bank interaction, there wasn’t much foul play in this part of the industry anyways.

With the drop in the home buying interest rates, the developers and home buyers are looking at the real estate market with a more positive outlook. Reduced interest burden on the homebuyers only adds in some increased demand in the industry which is certainly a good news for the real estate developers.

One segment that is likely to suffer with the demonetization drive is the resale and land transactions due to a large cash component being involved. Unaccounted cash plays a huge role in the resale transactions, however the demonetization drive has almost sucked out this cash from the economy. This would influence some distress resale of premium properties as well as land.

Demonetization and the Home Buyers
If you were looking to buy a premium residential property in Bangalore, there is perhaps not a better time than now. With the interest rates for home EMIs going low and the black money component being washed out of the economy, home buyers are more than happy to buy property at this time. With the recently passed Benami transactions act and the RERA act, the consumers are slowly getting the lost confidence back in the real estate market in India. With the demonetization, the buyers also had better opportunity to negotiate deals with the developers which was earlier just not possible.
If you are looking at buying resale properties in Bangalore, with the price correction happening in property rates post demonetization, there wasn’t a better time for the home buyers.The premium residential properties which were marketed at very high prices earlier are now much cheaper and hence a home buyer can now get a bigger property for the same price. With the interest rates and EMIs also going in favor of the home buyers; demonetization seems to have been a great move in the interest of the Indian consumers.

Demonetization and Real Estate: The Verdict

Demonetization today has been understood as a positive move that is meant for a better India.The act is more of a reform to regulate the economy boosting better growth and development. It is ultimately a win-win situation for both the buyer and the seller in the long run. Real estate may seem unaffected by the drive from the outsiders perspective, those from the industry are rejoicing the positives that the drive has brought about in the industry. The real estate market which was seeing a slump in the last few years is now gearing up for a bigger year ahead.