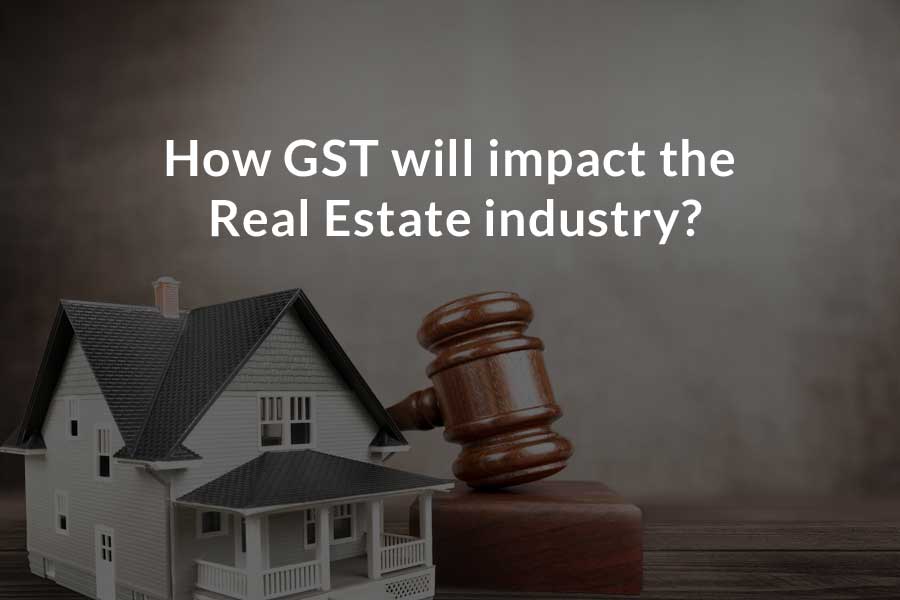 Over the last two years there have been several attempts being made by the government to streamline the real estate industry, which have now come through with the coming of the RERA ACT (Real Estate Regulation and Development ACT, 2017) and the Benami Transactions Act.

The announcement and implementation of the Goods and Services Tax (GST) Act, 2017 seems to have only added towards a brighter future for the Real Estate market in India for the years to come.

What is the Goods and Services Tax, Act (GST)?

The Goods and Services Tax, Act is a newly announced system of taxation in India which is supposed to merge many individually applied taxes into a single tax. GST is a comprehensive indirect tax on manufacturing, sale, and consumption of goods and services throughout India to replace taxes levied upon by the Central and State Governments.

Businesses registered under the GST Act can claim the tax credit to the extent of GST paid by them on the purchase of goods and services as part of their regular commercial activity. Exports under this Act is going to be considered as a zero-rated supply and imports will be levied on the same tax rates as domestic goods and services adhering to the destination’s principle besides the Customs Duty which won’t be absorbed in the GST Act.

The consumer will enjoy a reduction in the overall tax burden, which is now estimated to be at around 25%-30%. Free movement of goods from one state to the other can be expected without having to stop at every state border for hours to pay state or entry taxes. It would also reduce the amount of paperwork involved in these cases to a large extent.

It should be noted that the favourable impact of GST in the market will only be evident in the next 2-3 years after its implementation.

The GST came into force from 1st July, 2017 and with its announcement there is still a lot of ambiguity on what are the tax rates that will be applicable to the real estate and the construction industry.

GST and the Real Estate Sector in India- A fruitful union?

With the rapid rise in population in India, property investment has been the new trend as a lot of consumers are now inclined towards buying their own residential property. The Real Estate Sector in India has seen a rapid growth in the past decades, establishing itself as the second largest employer after the Agricultural Sector.

The growth of this sector is in harmony with the increase in the corporate sector and the rising demand for office space as well as urban and semi-urban accommodations. Bengaluru is expected to be the most favoured property investment followed by Goa, Mumbai, Ahmedabad,Pune, Delhi and Chennai (Source: India Brand Equity Fund,
https://www.ibef.org/archives/detail/b3ZlcnZpZXcmMzcxMDcmMzgw) . If you are looking for residential or real estate properties in Bangalore, Indya Estates is your one stop destination for finding premium residential properties.

Currently, a Real Estate Buyer has to pay several indirect taxes such as Excise Duty, VAT and Service Tax. These taxes bring the consumer’s tax liability to 11% excluding Stamp Duty. Under the new GST Act, all such Indirect Taxes will be eliminated, and the buyer will only pay a uniform tax of 12% on the purchase of Real Estate, excluding Stamp Duty. It is however only applicable for under construction properties and not on completed and ready-to-move-in apartments.

The real estate industry looks upon the Goods and Services Tax bill (GST) as an indication of change as many complicated tax issues torment the sector both at the Central and State levels. From a buyer’s perspective, the GST Act could prove to be beneficial if the GST rates are moderate. From a developer’s perspective, a uniform and stable GST rate could prove to be of significant profit.

What are the other taxes applicable in a real estate transaction presently, other than GST?

The various taxes that currently apply in a Real Estate transaction other than GST are as under:

SERVICE TAX- The service tax is a tax levied by the Government of India on services agreed or provided. The Real Estate developers will charge a service tax on the under-construction property you are buying from them; the developers deposit the amount of tax with the Central government. Currently, most homebuyers have to pay a service tax of 3.75% of the cost of a unit.

VALUE ADDED TAX (VAT)- VAT is a type of Indirect Tax levied by the Central Government of India on the sale of goods and services to the end consumers. It is a multi-stage tax meaning VAT is charged at each stage of the production process of goods and services. The general VAT rate varies from one state to another but remains between the range of 12%-15%. VAT rate for products such as liquor and cigarettes are charged as high as 15%.

STAMP DUTY- Stamp Duty is a type of indirect tax levied by the Central Government for the registration of sale agreements at Real Estate transactions. Stamp Duty is calculated as a percentage of the agreed value of the property, or the circle rate whichever is higher. Stamp Duty rates normally vary from state to state.

The coming of GST in no way is a hindrance to the government’s ‘Housing for all by 2022’ vision. The finance minister has clarified and stated that there will be no taxes under GST for the housing projects that are developed under affordable housing scheme.

While there are a number of speculations and rumours about the tax causing an additional burden on the tax payers, it is intact a move to transform India with the principle of “One Nation, One Market, One Tax”.

Impact of GST On Home Buyers and Investors

GST has truly simplified the tax structure for the home buyers who were previously subjected to various levels of taxes being levied in the different stages of the home buying process. The VAT, Service tax, stamp duty, registration tax; paying the taxes on various levels of the construction process, state taxes and so on were all complicated terminologies and figures for the home buyers to apprehend in one go. However, GST charges a standardised rate of 12 per cent of property value for all the under construction properties which is inclusive of the stamp duty and registration charges. Indirect taxes on sale of ready to move in properties shall no longer be applicable, thereby simplifying the second sale and purchase process. One of the biggest advantages of the GST comes from the fact that it standardises the taxation to be derived from one single purchase price.

GST further reduces the input tax credits which increased the overall logistics costs involved for the builder. These reduced costs are direct benefits which are now likely to be passed on to the home buyers in the form of price reductions. This is only likely to boost in investor and home buyers morale and will now pump in more investments into the real estate in India.

Final Thoughts!
While the country is still speculating the effects of GST, one thing is for certain that the GST will only pave a pathway for the overall development of India. The real estate in India will slowly see a boom in the industry once the speculations settle and the home buyers and the investors start seeing the GST in the positive light.